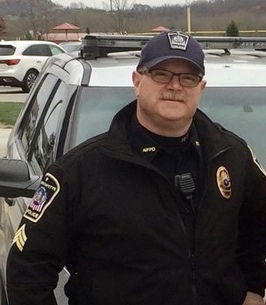 Sgt. Michael C. Hayes, 51, of Oakdale, North Fayette Township, passed away, with his loving family by his side, on Friday, September 16, 2022, in his home.

Mike was born on August 6, 1971, in McKees Rocks, a son of Charles and Judith May (Hawkins) Hayes, of Oakdale, North Fayette Township.

Sgt. Hayes was a retired Sgt. Police Officer for North Fayette Township. Mike dedicated his life to the force and his community. Being that Mike grew up in North Fayette, he always carried a special love for his small town. He cared for it like it was his own and often found ways to give back and be more involved in the community. Sgt. Hayes was a fire arms instructor and a member of the Oakdale F. & A.M. Lodge #669, and a past Vice President of PASRO. Closer to his retirement, Sgt. Hayes became the West Allegheny School Resource Officer. Sgt. Hayes took care of each and every student like they were his own children. He genuinely cared about what was going on in their lives and how he could help them, if needed. Sgt. Hayes’ door was always open for the students and everyone knew he was the shoulder to lean on. When it came time to fundraise for the D.A.R.E program that helped supporting local, students and families in need, Mike was the first knocking on doors. Mike always made sure that every student had a bed, a full stomach and a roof over their head.

Mike loved living his life and his life was constantly filled with adventure. Mike and his family loved to take vacations and RV trips together. Every summer the Hayes family was on the go, always traveling and documenting all the fun they were having along the way. Mike enjoyed being with his family more than anything. Spending time with his kids and wife, whether they were fishing, hunting, scuba diving or just sitting around the kitchen table, was what made Mike his happiest. Being by his family’s side, protecting, supporting and loving them to the best of his ability. There was never a game, concert or any event for his children that Mike missed. He was their biggest cheerleader and always encouraged them to do well in life. He and his wife, Jennifer, raised two amazing children that show the same strength that Mike has during his life. He loved his kids and wife more than anything on this Earth, and if you ever met Mike you knew just that.

Sgt. Hayes was an outstanding man. There are truly no words to describe the dedication and love he had for people, especially his family. There are some people in life that have the privilege of changing others’ lives and make a lasting impact, Sgt. Hayes was one. He treated each and every person he met like they were his family and he always made sure you knew you were a great friend to him. Sgt. Michael C. Hayes was a one in a million type of person and all that have crossed his path were truly blessed to do so.

Along with his parents, surviving are his rock, the love of his life and wife of 26 years, Jennifer (Bell) Hayes, his pride and joys, children, Courtney and Michael Hayes, Jr., sisters, Connie (Ted) Lutz and Lisa (Dan) Ryan, parents-in-law, Nancy (Howard) Bell Remaley, and a number of nieces, nephews and cousins.

In remembrance of Sgt. Hayes the family request donations be made to the Western Pennsylvania Police Benevolent Fund P.O. box 382 Meadownlands, PA 15347

All rights reserved. This obituary is also archived at obittree.com